The 2017 Cardinia Food Forum was both a celebration and a call to action: a celebration of the wonderful things happening in food and farming across Cardinia Shire, and an opportunity to together build a response to the challenges we face.

This jam-packed day featured international and local speakers, workshops and round table discussions.

Outcomes of the day - a snapshot

Inspiration - 81 % of attendees who filled out evaluation forms were 'very satisfied' with the day, and many wrote that they gained knowledge and connections with and about the local food system, found out about opportunities to get involved and were inspired to become more active in the community!

Strengthening new & existing initiatives - Attendees were able to hear about some of the great work being done locally that they were previously unaware of (including The Dig In Cafe and The 4Cs) as well as new and developing initiatives including The Cardinia Community Grocer, The Pakenham Secondary College/CSM Organics Community School Farm, The Cardinia Food Network and opportunities to get involved.

New connections were formed across and between attendees and speakers, growing and strengthening the food movement and the work many people are doing. Examples include the Pakenham Secondary College Community School Farm Roundtable, which garnered wide attendee interest including from the Stephanie Alexander Kitchen Garden Foundation. The 3000 acres mapping workshop also had residents brainstorming collaboration opportunities for food growing.

Building shared understanding of the local context and challenges and opportunities. Attendees commented on the new knowledge gained from hearing Jen Sheridan present on the Melbourne Foodprint research findings regarding the value of urban fringe food bowl areas including Cardinia and the multiple pressures the green wedge is facing. This was balanced by hearing the opportunities for community-led transformation from Devita Davison.

Community ownership - The event was a grassroots community effort, with food network members playing a key role in organising and delivering all aspects of the day, from program design to set up, registrations and pack down. There was tangible pride and excitement across this group, with discussions turning to next year while cleaning up and 'what else we can do, who else we can engage'. This community ownership and engagement not only builds local capacity but ensures project activities are relevant and embedded in the local community. 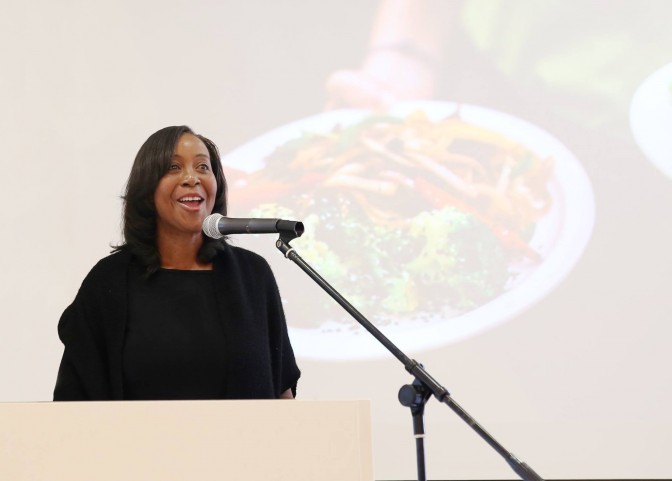 We kicked off the morning with the official launch of the Cardinia Food Circles project and signing of the Urban and Regional Food Declaration by Cardinia Shire Council's new Mayor, Cr. Ross.

Devita Davison, the Executive Director of FoodLab Detroit then took us on a journey to Detroit, Michigan and the work being done to rebuild the food economy of the city following the collapse of the automobile industry. A collapse that reduced the population of the city from 2 million to 700 000 and drastically reduced the number of grocery and fresh food outlets across neighbourhoods.

The health impacts and lack of economic opportunity that occurred as a result of this exodus has sparked 'an amazing grassroots movement of community leaders and urban farmers and growers, restauranteurs and entrepreneurs' who form a burgeoning network of more than 1500 community gardens and urban farms involving more than 30,000 people' growing food. Attendees heard that since 2013, more than 240 businesses have been mentored and supported by Devita and the Detroit Food Lab and in the last year alone more than $7.5 million in sales were generated from these businesses in a city where over 40 per cent of the population live below the poverty line.

After Devita we heard from Jen Sheridan on the incredible research being done through the Foodprint Melbourne project, quantifying and capturing vital data on the production value of Melbourne’s city fringe food-bowl, the vulnerabilities in the city’s food supply and the critical importance of our ever-shrinking perurban farm areas, including Cardinia Shire.

After morning tea we broke into 'round tables' and heard from a range of local and regional stakeholders about their work across four themes:

These sessions were structured so that each panelist spoke for 8 to 10 minutes before opening the floor up to community members for conversation and dialogue.

Theme 1 speakers and the discussion canvassed a range of different approaches to the theme: Protecting Land to Grow Food, ranging from farm succession planning (NextRural), to the innovative investment and co-operative approach OriCoop is pioneering in Australia and urban land reclamation for food growing (3000 acres).

Theme 2 centred on vital work being done to enhance food knowledge and skills in a range of community and education settings, and attracted a large and engaged audience, as did Theme 3, with attendees keen to hear about the FareShare kitchen garden model, and many were inspired by The Dig In Cafe's grassroots approach.

Theme 4 turned the microphone over to local farmers, distributors and chefs and, for some attendees, marked the first time they could engage directly with local growers.

After lunch we broke into workshops to dig into some of the issues and ideas raised throughout the morning.

This event has already taken place.

For more information about this past event, visit cardiniafoodmovement.org/