This report summarises presentations and a series of facilitated conversations at "Healthy and Fair Food for All Summit," an independent dialogue process as part of the global process leading to the first United Nations Food Systems Summit.

Held on 27 June 2021, the all-day event was convened by partners of the Australian Research Council (ARC) Discovery Project, ’Strengthening Food Systems Governance at the Local Level’ (University of Sydney, University of Wollongong, and William Angliss Institute), along with Sustain: The Australian Food Network and the Right to Food Coalition (RTFC).

​The event brought together 120 participants from across the food system. Participants were recruited through  targeted emails, and the event was publicly promoted on social media and through  various e-newsletters to ensure a diverse set of participants. ​

Together attendees explored key challenges  and opportunities facing Victoria’s (and other local Australian food systems) food system now and in the coming decades, along with concrete actions that needed to advance an agenda of progressive change.

The report can be viewed here.

Sustain thanks all those who participated in this dialogue and especially the organising and facilitation team members:

The event was designed to share new food system research and initiatives as well as actively encourage discussion between participants. Invited keynotes and presenters reflected on a range of critical food system issues including First Nations food sovereignty, food security and the role of local governments in enacting positive change.

As we enter into a period of increasing uncertainty and change, creating spaces for constructive dialogue across diverse groups is more needed than ever. As a healthy and sustainable food systems network, we are committed to supporting similar dialogues and engagement in Victoria and nationally.

Keynote addresses by Uncle Ghillar Michael Anderson and Victorian Senator Lidia Thorpe were a highlight of the day. Other presentations explored VicHealth's new Local Government Partnership, research findings the ARC research project, youth-led food justice advocacy and the need for a right-to-food approach to food insecurity. These presentations are summarised in the report. 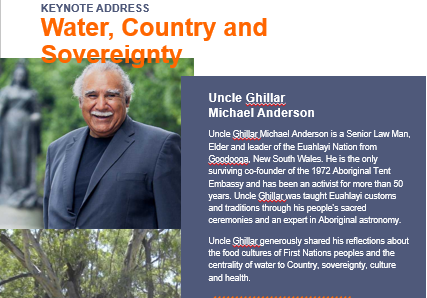 Through these systems, we managed to live a sustainable lifestyle, so that we’re not all farming one area, but we move around. Because our food can only be harvested in a short window of 2-3 weeks, you need to make sure that you’re there at that place at that time. Over the thousands of years we’ve been here, we understand how that works. We didn’t have to till the soil, because nature provided everything that we needed. It’s a wonderful system, if we could only get back to it. 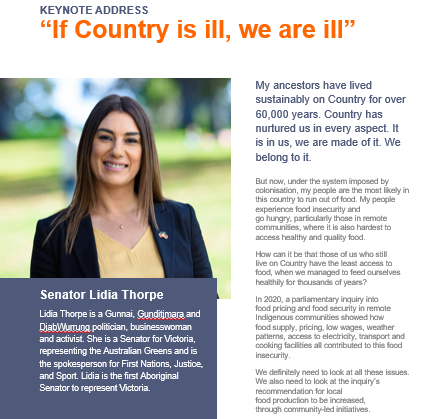 Because of colonisation, land dispossession, and the attempts to destroy our cultures, my people are pushed to experience a burden of disease 2.3 times that of non-First Nations people in this country, with chronic disease such as cardiovascular disease being of particular concern, but also higher mortality rates and shorter life expectancy. It is important that we provide good quality and preventative healthcare in a culturally safe way to address this. First Nations community-led health organisations have shown to do this most effectively.

The event included three opportunities for small-group discussion in small break-out rooms with designated facilitators and note-takers. Each dialogue session was focused on a particular topic. The aim of the facilitated discussion groups was to understand the diverse perspectives of participants regarding the food system and to stimulate learning and exchange.

These group discussions are summarised in the report. At the end of this report, a selection of event organisers and dialogue facilitators also offer their reflections on key issues explored by participants and the implications for food system transformation more broadly.

Positive food systems action is multifaceted and requires a coherent approach from diverse actors. Across the course of the event, it became apparent that sharing knowledge among food system actors and establishing a common language in which all food system discussions can be conducted were important for extending and refining existing work. Creating spaces where actors and activists can regularly connect, share and collaborate will be important for providing a platform for knowledge exchange and aligning messages

A focus of governments to allow the food system to be moulded by retail giants over the past 20-30 years has resulted from lack of policies related to planning for land use and the built environment. The tide is changing, however, with consumers demanding a food system that is supportive of both planetary and human health. This means reimagining the way in which food is grown, transported, and ultimately consumed. The energy and commitment of civil society to a grassroots approach will need to be met with commitments from state and local governments to transform the food system for health of Australia and its people.

We often recognise the diversity of issues inherent in food systems thinking and research, but we often reduce our legislative or regulatory target to local government as the most immediate and accessible government actor in the food space. With a more nuanced and comprehensive awareness of government we might well find more and more diverse allies and advocates across all tiers: local, state and federal. A developing understanding of the different tiers of government and their particular food system responsibilities would see a more targeted approach to calls for food system change.

The Victorian Independent Food Systems Summit represented an impressive and exciting collective of researchers and practitioners with deep commitments to food system transformation. Many participants work in local government and community organisations, doing the difficult work of trying to create change.

Sustain has a great ability to draw a diverse range of people ‘into the room’ and that is an asset for these discussions of food systems. It’s a system so of course we need diverse stakeholder groups talking to one another.

Fantastic day with great content. I enjoyed the mix of group sessions (breakout rooms) and presentations, and the Miro board complemented the day well.

Well managed by Sustain and the support of the students from the Just Food Collective. It’s great to see the students involved.

I appreciate the small group discussion rooms as they give everyone the opportunity to have a voice.