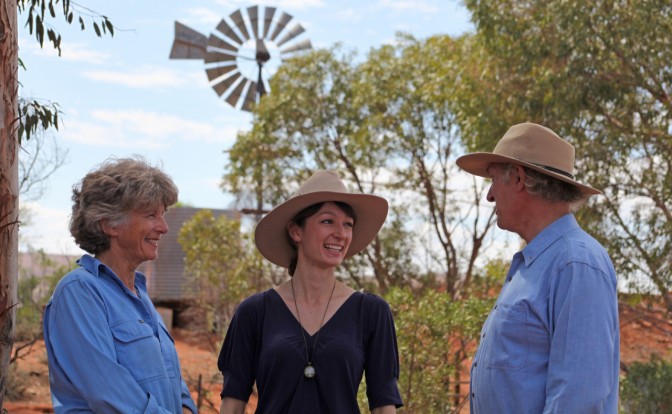 I have a deep sense of belonging to this place. And I have a responsibility to look after the people and other life I share my home with.

My heart is breaking when I look out the window these days. Thick red dust turns day to night. The future I thought I had here is being blown away. Climate inaction is jeapodising the future of the next generation of farmers.

The rate and scale of the changes mean my family, as farmers and landmangers, can’t adapt quick enough. Although we have undertaken extensive tree plantings, when open ground temperatures reach 70 degrees Celsius, the seedlings are baking. Our sheep are no longer dropping lambs because extreme high temperatures are making them infertile. We raise African sheep and goats, arguably two of the hardiest species on the planet – but as conditions become too hot and dry for them, we have realised we have come to the end of the line.

Season after season, year after year, records are being smashed in high temperatures and low rainfall. For anyone under the age of 40, we have never known a year of global average temperatures or below.

The climate impacts that affect farmers are a concern for everyone. The impacts concern every meal on every plate. To highlight this – I’m a food producer, and my family’s farm is no longer producing food.

Agriculture holds a very unique position on climate change. It is part of the problem. It is one of the most vulnerable and exposed sectors to climate change impacts. It is also a key player in the solutions.

And there are so many solutions! Farmers can reduce emissions from the agricultural sector and drawdown excess carbon from the atmosphere. We know the accelerators of change (policy, capital and social behaviour), and these result in multiple benefits, both to agriculture and wider society.

Groups like Farmers for Climate Action are championing the transition to a low-carbon future and are positioning farmers front and centre of the solutions. But you don’t have to be a farmer to help agriculture – everyone can play a role from exactly where they stand now. By using one’s consumer influence, political influence and social influence, each of us can step up on climate action and be the leader we’ve all been waiting for.

Anika is a passionate advocate for sustainable farming, environmental conservation and climate change action. Hailing from her family’s sheep station near Broken Hill, far western NSW, she is a founding director of Farmers for Climate Action, a movement that puts farmers on the frontlines of climate change at the centre of climate solutions. Anika was named the 2015 Young Farmer of the Year, and was the 2017 Young Australian of the Year NSW Finalist. You can follow Anika’s work on all the social media channels at @AnikaMolesworth.