Land has always been central to the Israel-Palestine conflict that has now endured for decades. Because of this, the development of Palestine's agriculture, food, and farming are severely affected by the region's tensions. Following the most recent bout of hostilities in May, Gaza's agriculture ministry estimated around $27 million in damages, including greenhouses, agricultural lands and poultry farms (Reuters).

At Sustain, we believe that our mission to build a fair food system requires us to act in solidarity with farm and food systems workers who are struggling for justice and dignity, not just in Australia but worldwide. This is especially the case with farmers and farm workers who carry out the essential and life-giving vocation of feeding their families and communities in the most challenging and oppressive situations - nowhere more so than the Gaza Strip.

We recently approached by Gaza Urban and Peri-urban Agriculture Platform (GUPAP), a forum that brings together key actors involved in the development of a resilient Palestinian agricultural sector in the Gaza Strip.

Together with GUPAP and the Australian-based charity Global Gardens of Peace, we are building a networking of organisations that can help us raise awareness and funds for women-led enterprises that have been affected by the violence in Palestine. For more information, contact our Executive Director Dr Nick Rose.

GUPAP and Women-Led Enterprises in Palestine

Over the last two years, GUPAP has been supporting around 50 women working in agriculture and food by providing technical support, training and capacity building. Through the Urban Women Agripreneurs Forum (UWAF), many of the women have succeeded in getting official labelling for their products, enabling them to market their local products. Their products-- ranging from fresh produce to date paste, stevia sweetener and jam--are sold at local markets and contribute to the local food system and ensuring healthy and nutritious food to local eaters.

The recent escalation of the Israeli-Palestinian war in May has partially or severely damaged over half of these women-led agro enterprises.

As per official data of the Palestinian Ministry of Agriculture and Ministry of National Economy, before the war there were around 1000 agro women enterprises in the Gaza Strip. According to GUPAP/UWAF, the recent escalation of the Israeli-Palestinian war in May has partially or severely damaged over half of these women-led agro enterprises. Many are unable to continue production and thus support their families and communities. This also impacts the families of Gaza Strip whom the produce caters to.

This devastation comes off the back of the COVID-19 pandemic, which has already increased the insecurity, vulnerability and marginalisation of women agripreneurs, together with the continuing and intensifying impacts of climate change.

At this critical juncture, emergency support is needed. GUPAP needs help to enhance the resilience of their women agripreneures and provide emergency assistance to their agricultural enterprises and home gardens.

Sustain is in the early stages of determining how we can best be of assistance. If you are interested in joining us to generate awareness and funding assistance, we invite you to reach out. 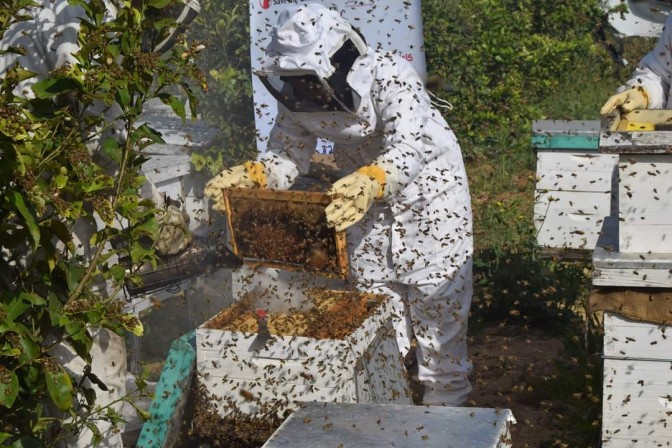 Samar rehabilitates her bee farm following the damages of her small agri-enterpris during the last aggression on Gaza.

Even bees and their hives were not protected against shells and bombs during the last aggression on the Gaza Strip May 2021. Samar, an agripreneur and member of UWAF, runs a bee farm that was damaged due to the heavy bombardment on Beit Hanoun town. Her operation is the only source of income for her and her family.

Samar's bee farm is only one among many that were affected. Seven thousand active beehives were destroyed during the last bombardment on the Gaza Strip, according to the report of the Ministry of Agriculture, where the total number of active beehives in the Gaza Strip was estimated at twenty thousand, prior to the latest bombardment. The bee sector is considered one of the most affected by the last aggression on Gaza as a result of its proximity to the border with the occupation, in addition to the coincidence of the aggression with the honey harvest season, which prevented the beekeepers from reaching their bees and thus incurring losses due to bees feeding on the product.

Seven thousand active beehives were destroyed during the last bombardment on the Gaza Strip.

Samar spoke about her story, saying, "The difficult conditions in the Gaza Strip did not prevent me from being one of the girls who owns a bee farm. Beekeeping is a hobby that I have loved since I was young, and in light of the current conditions of high unemployment and lack of job opportunities, I decided to invest my energy in beekeeping."

She added, “I feel proud being a member of UWAF which was established and incubated by the Gaza Urban Agriculture Platform. It has allowed me to exchange experiences and knowledge with other women agrirepreneurs members, and learn about similar Arab success stories regionally, in addition to raising and strengthening the voice and rights of women farmers and agripreneurs, advocacy and influencing policies to achieve food security and food sovereignty in Palestine."

She also praised the role GUPAP has played through standing by their small and micro enterprises, providing production inputs and raw materials to the 50 UWAF members in order to continue working and producing after the damages and big losses in their enterprises during the last aggression.

Samar called on all parties to stand by this vulnerable sector to enhance its resilience and sustainability in light of the fragility that the agricultural sector suffers from as a result of the last aggression on the Gaza Strip, in addition to the Coronavirus crisis, where women’s enterprises suffer from marginalization and inability to market and sell their local products despite its quality and highly competitive with imported products. 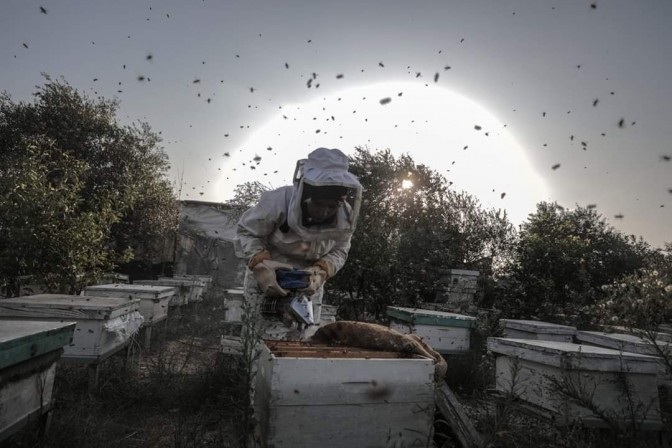