The Story of Samar Al-Baa the Beekeeper

Samar Al-Baa's bee farm is not only the sole source of income for her and her family, it is a career that has fascinated her since she was young.

"Beekeeping is a hobby that I have been passionate about since my childhood. The difficult conditions in the Gaza Strip did not prevent me from becoming a beekeeper and having a bee farm of my own." 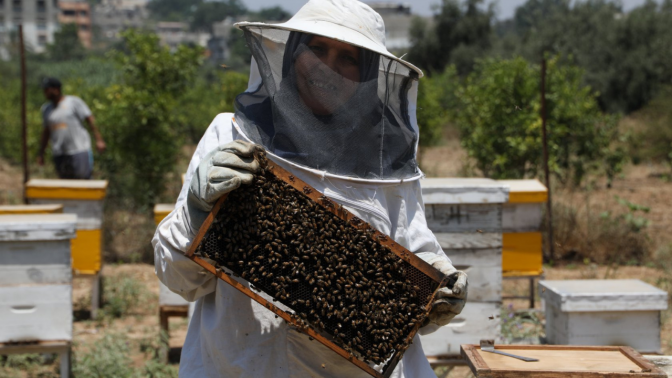 But even bees and their hives were not protected against the shells and bombs during the last aggression on the Gaza Strip in May 2021. The beekeeping sector is considered one of the most affected by the last aggression on Gaza as a result of its proximity to the border with the occupation. According to the Ministry of Agriculture (MoA), of the estimated 20,000 existing beehives, 7000 active beehives were destroyed during the last bombardment on the Gaza Strip.

The bombing also coincided with the honey harvest season, thus preventing beekeepers from reaching their bees. This caused wage losses for many beekeepers.

Amongst those affected was Samar and her bees, her beehives heavily damaged during the recent bombardment of Beit Hanoun town. In the days and months after this destructive period, support from GUPAP helped to ensure her and her farm's resilience.

"GUPAP stood by us female beekeepers and micro shopkeepers, providing us production inputs and raw materials so we can continue producing and working after the damages and losses incurred during the last aggression. GUPAP also supported us in raising and strengthening our voice, advocating for the rights of women farmers and influencing policies to achieve food sovereignty in Palestine. "

But it was the Urban Women's Agripreneurs Forum (UWAF), established and incubated by GUPAP, that provided Samar with peer-to-peer connection and inspiration from fellow women farmers working to restore and strengthen their farms.

"UWAF allowed me to exchange experiences and knowledge with other women members, and learn about similar Arab success stories regionally."

Samar credits the opportunities it has provided her, to exchange experiences and knowledge with other women members, and learn of similar Arab success stories regionally. In addition,

In the coming months and years, GUPAP will seek to transform this intervention into a sustainable program based on several strategic interventions to reach at least 500 women food producers. Already facing major challenges to produce and retail their harvests, due to high competition with imported products, Samar calls partners and allies to stand by this vulnerable sector to enhance its resilience and sustainability in light of the sector's damage during the most recent aggression on the Gaza Strip.

Support Samar in her efforts to not only restore her hives, but to restore food sovereignty for Palestine.