For almost 20 years I have been working in the field of food systems, as a researcher and as a community organizer, food producer and educator. My work has been deeply rooted in engaging closely with communities as partners in the conception, design and implementation of research that meets peoples’ needs. Much of my work has been focused on Canada but I have always had an interest in the way our food systems shape and are shaped by global social and ecological realities. More importantly, in my research on network building, collaboration and food movements, I am always exited to learn about other places and the important work to build food systems that are healthy, equitable and sustainable. This includes not only celebrating the successes of our work, but also acknowledging and acting on key areas that leave many people across the globe hungry and marginalized from the decisions that impact their food systems.

Specifically, people living in Canada and Australia have many commonalities in respect to the continued pressures of colonization and industrialization on food systems...

As part of my ongoing efforts to build new partnerships with food movements and food studies researchers, I became very interested in the work happening in Australia. Specifically, people living in Canada and Australia have many commonalities in respect to the continued pressures of colonization and industrialization on food systems as well as the collective responses such as development of people’s food policies, food sovereignty movements, regenerative agriculture and agroecology and the emergence of food policy councils, to name only a few. I have been inspired by meeting the many Australians that have traveled to Canada over the past decade including visits from Nick Rose, Executive Director at Sustain Australia and Lecturer at William Angliss Institute, Kelly Donati, Sustain Australia Board Chair and Lecturer at William Angliss Institute, Alana Mann, Senior Lecturer at the University of Sydney, Catherine Philips, Lecturer at the University of Melbourne, Luke Craven, Research Fellow in the Public Service Research Group at the University of New South Wales and Peta Christensen, Food Systems Projects and Partnerships Team Leader at Cultivating Community.

I had the great privilege of traveling to Australia between October 18-27, 2018 to continue to build on these relationships with community-based food systems organizations and academics and to meet with new researchers, educators and community practitioners involved in work around food sovereignty, social justice and ecological sustainability. During my two weeks in Australia, I was blessed to be hosted so graciously and meet an amazing group of engaged and passionate people such as Rachel Cary, Lecturer and Research Fellow in food policy and sustainable food systems at the University of Melbourne, Tanya Massy, Cardinia Food Circles, and Sophie Lamond, Director of the Fair Food Challenge and to learn about projects such as STREAT, the Alphington Community Food Hub, the Stephanie Alexander Kitchen Garden, the Community Grocer and countless others. 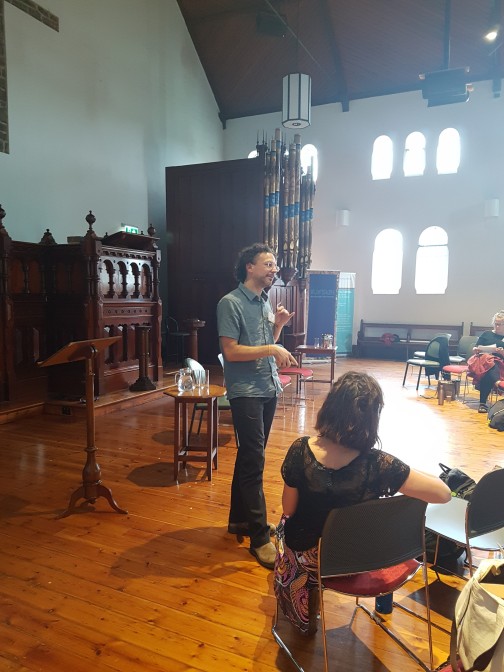 While in Melbourne, I had the great pleasure of participating in the New Economies Network Australia Conference which brought together a diverse range of participants from across the country with an aim to build a fairer and more ecologically sustainable economy and society. I was joined by international participants including Jose Luis Vivero Pol who spoke at the right to food and food as commons and Eric Holt- Giménez from Food First who spoke about the links between agroecology and food sovereignty. The conference began with an impassioned keynote and call to action from Mary Graham, a Kombumerri Person from the University of Queensland. Her talk pointed to the history of First Nations peoples care for nature and management of the commons which was violently disrupted by colonialization and ongoing settler-colonialism. There were an inspiring mix of presentations and interactive workshops on community economies, including a fabulous dinner at Higher Ground Closed Loop Restaurant. I was also honoured to be invited as an international witness to the Australian Peoples Tribunal for Community and Nature’s Rights in Brisbane. The event was held in the Supreme Court and heard from a diverse range of witnesses – international, settler and Indigenous peoples – that discussed the ecological and social challenges facing Australia’s ecological systems but also the opportunities for social and environmental justice and legal reform. Beyond these events, I also had the great pleasure to speak with the Mayor and staff of Cardinia Shire Council, food studies students and community members at William Angliss in a public lecture, and faculty and community members in Launceston, Tasmania. 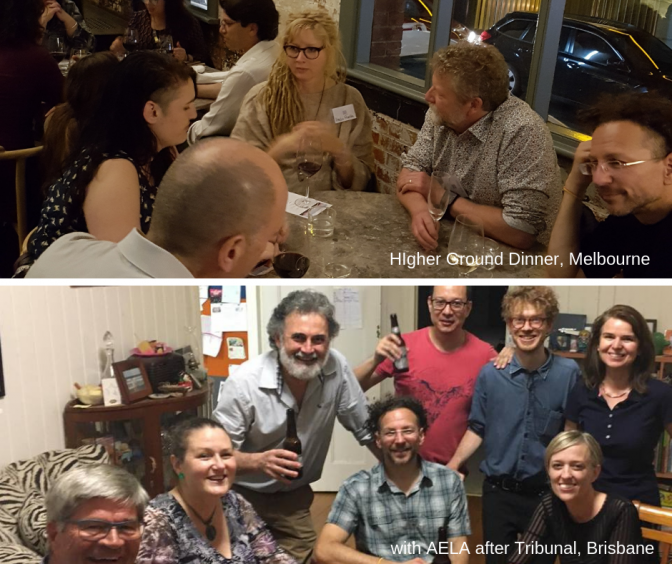 Charles at different events in Melbourne and Brisbane

I have come to believe that there is much to learn from our shared experience of colonialism, corporate concentration, but also from our efforts of resistance to build alternatives to the dominant food system.

One of the key things I took from my visit was the similarities of the social and political context between Canada and Australia. After completing some background readings (I highly recommend Christopher Mayes’ Unsettling Food Politics) and having many conversations, I have come to believe that there is much to learn from our shared experience of colonialism, corporate concentration, but also from our efforts of resistance to build alternatives to the dominant food system. As part of this work, a food systems lens can help us all to better understand, not just the problems but also the opportunities to build more healthy, equitable and sustainable ways to bring food from the waters, fields and forests to our plates. In this way, food can be leaver for making positive change across a number of sectors, scales and places. Through food, we not only produce/harvest sustenance to nourish our bodies but also ecological services, cultural heritage, and relationships. Through my work I have seen the ways that individuals and groups are increasingly coming together to voice their oppositions to the social and ecological implications of the dominant food system but also to build viable solutions. These initiatives recognize that our planetary and social problems are interconnected and seek to transform our relationships with each other and with the natural world. This is the power of food movements – the coming together of diverse initiatives as part of collaborative networks and making the space to have the often uncomfortable conversations to bring us towards more equitable and sustainable futures.

I look forward to continuing to develop these relationships with my colleagues and new friends in Australia. If you are interested in participating in these ongoing discussions please contact me.