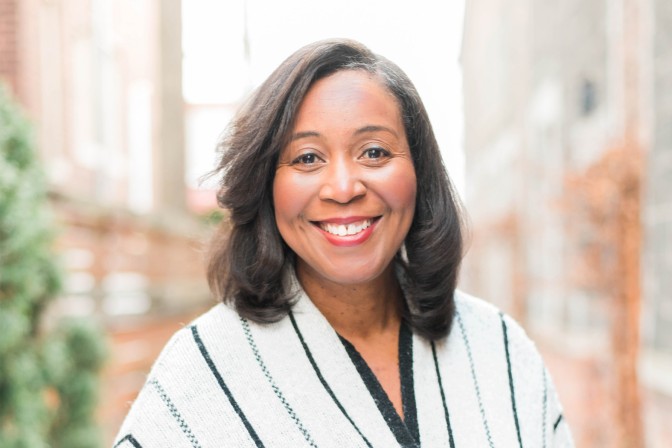 Devita Davison returned to Australia for the second time in 18 months in late January and early February 2019. She was here for the launch of Foodlab Sydney, an Australian Research Council-funded project led by Sydney University and the University of New South Wales (Canberra), in partnership with the City of Sydney, TAFE NSW and Foodlab Detroit. After the launch of Foodlab Sydney in Redfern Town Hall on 1 February, Devita travelled to Tasmania for events in Launceston and Hobart, before arriving in Melbourne for an intense burst of events from Thursday 7th February to Sunday 10th February, organised by Sustain. She spoke to more than 1000 people in and around Melbourne during her 7 speaking engagements in the city. We can't thank her enough. And we also thank the City of Darebin, the City of Moreland and the East Gippsland Food Cluster for their financial support in making Devita's visit possible. 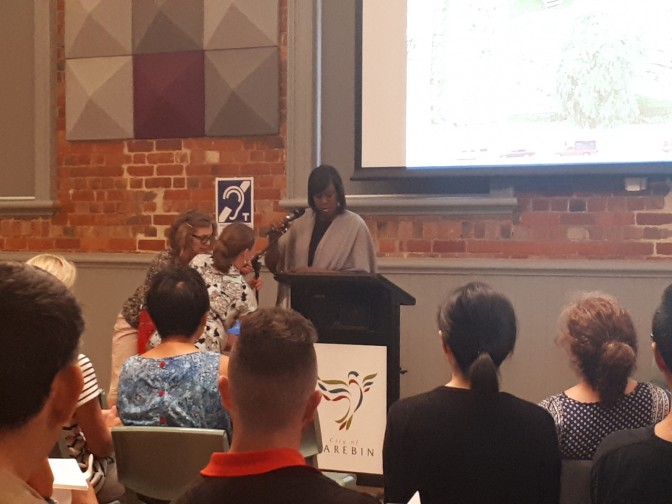 Devita began her Melbourne speaking tour at Preston Town Hall. Hosted by the City of Darebin with over 100 residents and visitors in attendance. They came to hear Devita tell the story of Detroit (Motown) - once the 4th richest city in America - it experience a an abrupt decline in the 1970s and 1980s through the collapse of the automobile manufacturing industry. From a peak population of over two million people, Detroit has under 700,000 residents today. As Devita put it, Detroit is a 'cautionary tale' for Australia, revealing the extreme vulnerability that comes from over-reliance on a single industry. 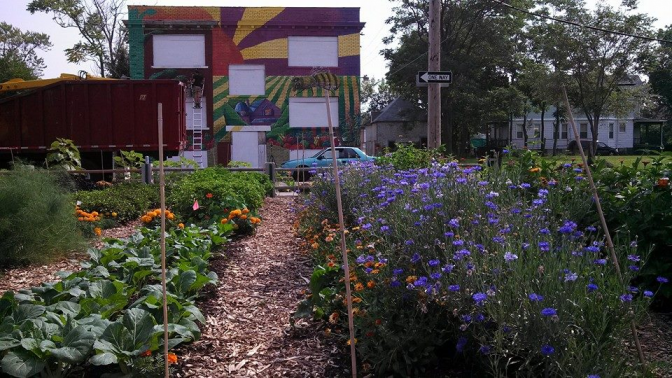 But Detroit is not only a story of collapse and hardship. It is also a story of hope and renaissance - through food. Starting in the mid-2000s, Detroit began to experience an explosion of urban agriculture and gardening. Today there are more than 1600 urban farms and community gardens in the city. And from these productive foundations, Devita and her colleagues have created a not-for-profit organisation called Foodlab Detroit that provides training, business advice, mentoring, friendship and market access for a growing community of micro-food entrepreneurs in the city. 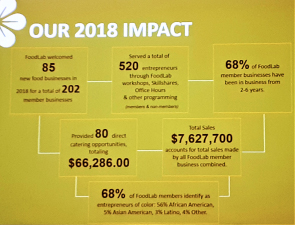 Devita shared the story of Foodlab Detroit and its model of small business support with a highly engaged audience of current and aspiring food entrepreneurs - as well as researchers and support organisations like the Stepping Stones program of the Brotherhood of St Laurence. This event was hosted with the City of Moreland in Glenroy, in the evening of Thursday 7th February. 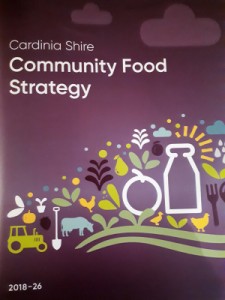 In November 2017 Devita was the keynote speaker at the inaugural Cardinia Food Forum, which saw the launch of the Cardinia Food Movement . In early 2018, the Sustain Cardinia Food Circles team and the Cardinia Food Network led a program of kitchen table talks and an Idea Harvest campaign that reached over 500 residents and led to the creation of Cardinia Shire's first ever Community Food Strategy.

Devita returned to Cardinia and her excitement was infectious at the celebratory launch of the Food Strategy in the morning of 8 February at the Toomah Centre in Pakenham. Over 60 local residents and representatives of local and regional organisations were present as Devita shared her powerful message, "the liberation of Detroit is bound up with the liberation of Cardinia." After being filled with inspiration from Devita, those attending got to work in small groups to plan out collaborative actions to implement the Food Strategy over the next 12 months and beyond. 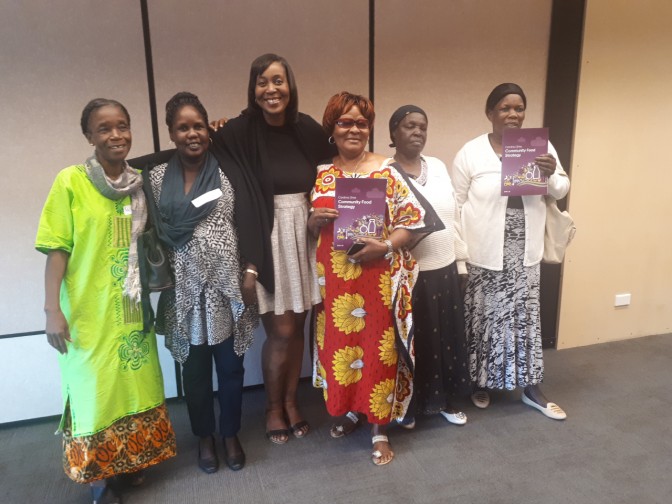 Devita with members of the Cardinia United Africa Women's Collective

Devita's tour continued on Friday afternoon with a drive further down the Princes Highway to Warragul, where an enthusiastic group of 40 members and friends of the fabulous Baw Baw Food Hub were eagerly awaiting her arrival. This event was a collaboration between the East Gippsland Food Cluster, Agribusiness Gippsland, the Baw Baw Food Movement and Food Hub, and the newly-formed Food for All La Trobe Valley. Those attending heard representatives of each of those groups share their respective stories, as well as of course Devita's journey with Foodlab Detroit.

After a well-earned rest day on Saturday, Devita's tour continued on Sunday morning, 10th February, with a visit to the Melbourne Food Hub at the Alphington Farmers Market. 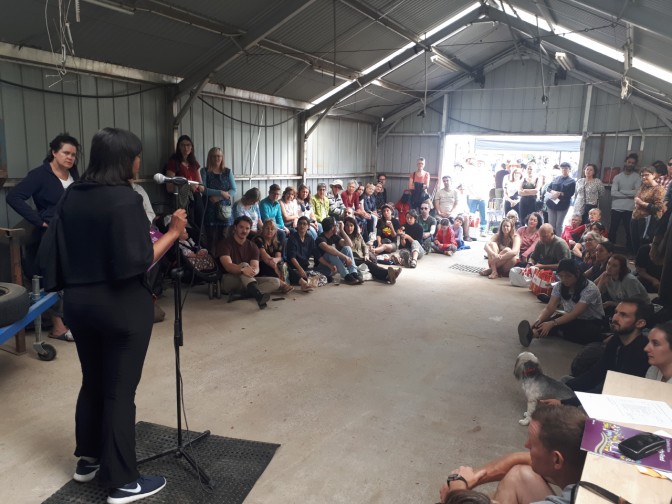 The talk took place in the shed that will become the Hub's community and commercial kitchen. Devita made special mention of three factors that have played a big role in the expansion of the local food movement and economy in Detroit. These are: 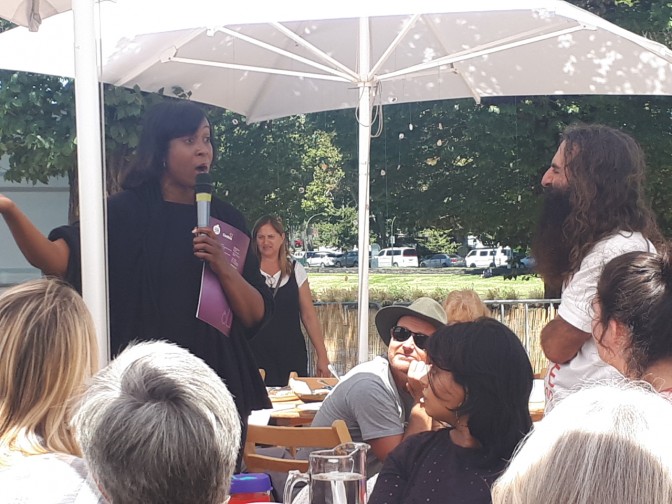 Devita then sampled the vegetarian delights of some of Melbourne's urban farmers at the delightful Great Local Lunch, held as a highlight of the annual Sustainable Living Festival. She shared some highlights of her trip to a 225 strong crowd in conversation with host Costa Georgiadis.

Then at 4.30 pm on Sunday Devita's speaking tour to Melbourne concluded in style, with a rousing address to 450 people in the Big Tent. Devita was joined on the Locavore Living: Reclaiming the Commons panel by Costa, David Holmgren, Morag Gamble, Henry Coleman (standing in for Helena Norberg-Hodge) and Sustain's Nick Rose. Many in the audience were moved to tears by Devita's words and she received a wonderful standing ovation. 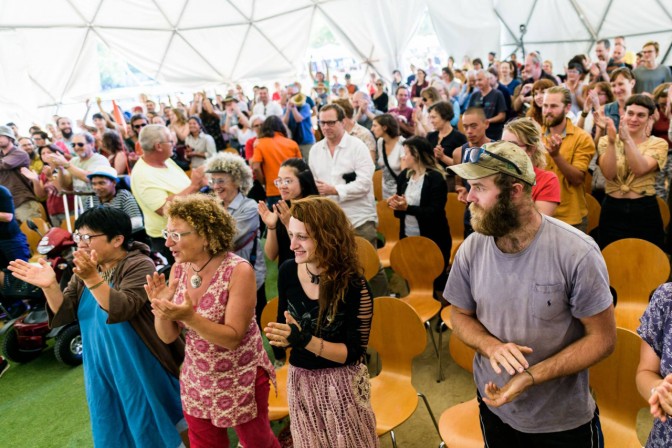 Standing ovation for Devita Davison in the Big Tent, SLF 2019 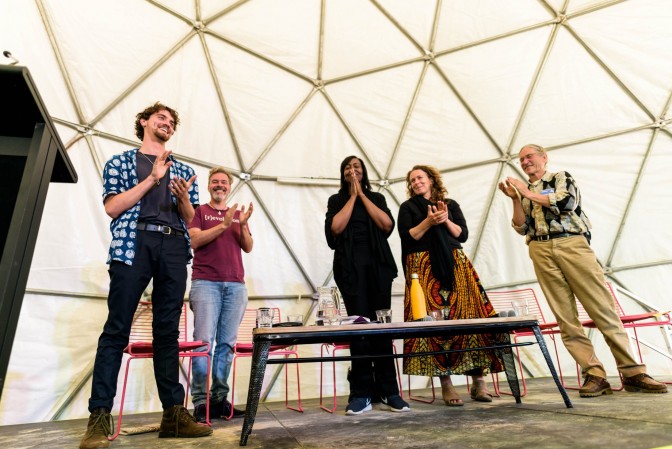