In this post, I will share my experiences and perspectives as the Community Engagement Coordinator in the Cardinia Food Circles project since I first came on board in mid-2017. This project is a cross-sector collaborative effort to grow a healthy food system in Cardinia Shire.

My approach to engaging the community is to be present, to be curious, and to also be active in the neighbourhood. I use tools like the Asset Based Community Development method to foster and strengthen new collaborative relationships. 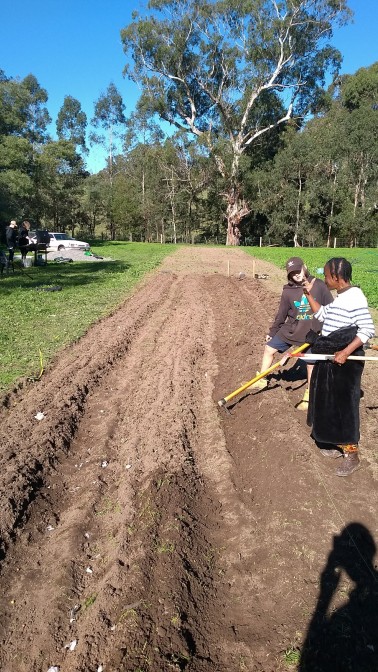 The first food mapping workshops, held in three townships across Cardinia Shire--Pakenham, Koo Wee Rup and Gembrook--were attended by local growers, residents and businesses. Using the Circles of Food assessment tool (part of the broader Circles of Sustainability project), we jump-started the conversation around the ecology, economics, culture and politics of the local food system.

These workshops were instrumental in bringing together locals who, impassioned for change, formed the foundation for what was later to become the people-powered Cardinia Food Movement and Network (CFM).

The Food Fun Day was an activity early on in the project that sought to capture young people’s imagination and passion for fresh food.

With funding secured through one of RMIT’s Enabling Capability Platforms grants, the ever generous team at O.MY restaurant in Beaconsfield opened their farm gate and invited a class of students from St. Patrick’s Primary School to learn about their approach to growing and serving meals at their twice Chef Hat-awarded, paddock-to-plate restaurant. The day, which also had an element of discussion in the classroom, was co-facilited by Dr. Luke Gaspard, a research fellow from RMIT. The whole day was captured on camera and produced into a mini film clip by Ben Hodson at Pearl Film Company.

One of my favourite moments in the history of the project was the far-reaching community consultation which fed into the creation of the Cardinia Community Food Strategy + Action Plan.

Over the 20 Kitchen Table Conversations that were facilitated by our very own Community Food Animators in kitchens, dining rooms, restaurants and community hubs, around 400 local residents contributed their ideas and visions for a healthy, delicious, sustainable and fair food system. 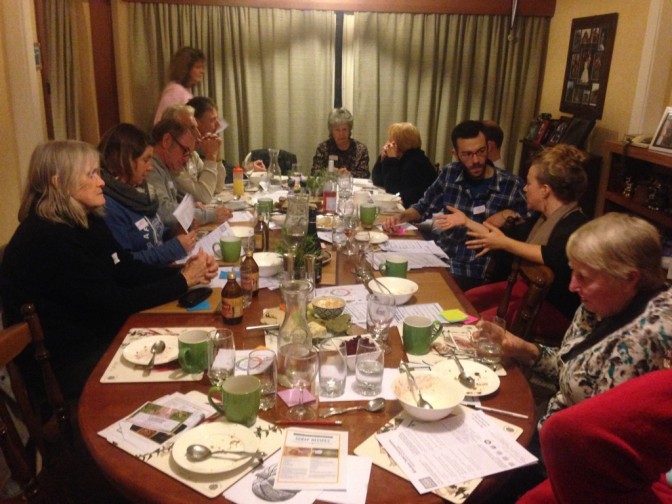 During this period, the Community Food Animators also set up information stalls at various local events. We always had farm-fresh produce for sampling, laminated posters for people to record their experiences and solutions, as well as cardboard cut-outs for kids to make 3D models of fruits and vegetables. Here’s one of the vox pops I took at the Performing and Visual arts in Emerald festival.

Perhaps our aim to engage 1,000 residents across the 1,283 km² that is Cardinia Shire was overly ambitious for a period of time that only lasted four months. This included the time allotted for training the food animators, some of whom had never done anything like this before.

With very few local examples of this approach, I was glad to find that the model had been extensively documented by the People’s Food Policy project (now Food Secure Canada).

Within six months after the last Kitchen Table Conversation, the results were reviewed and analysed, evidence for proposed actions was researched, and a draft strategy was released for public exhibition in early October. By December, 2018, the Community Food Strategy, along with its 67 actions, was officially adopted by Cardinia Shire Council.

At this point I want to do a big shout out to all of the Food Animators and Scribes who spent countless hours preparing for, facilitating, and capturing the ideas and thoughts of hundreds of people in minutes, recordings and pictures. That’s Heike, Angelique, Shoheli, Mez, Tamsin, Sonya, Jane, Peter, Sue, Megan and Phil. This was an incredible achievement and we couldn’t have done it without their efforts and community connections. 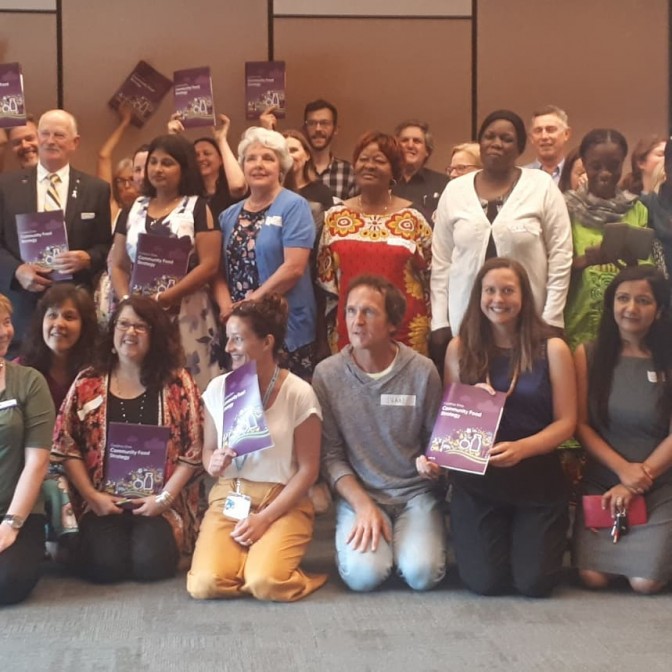 The Pakenham Community School Farm and Food Project is a community model for disadvantaged youth engagement and work pathways. Funded by the Victorian government's Pick my Project grant, it seeks to provide structured vocational learning and employment pathways for school students.

The initiative was built on what was already a fruitful partnership between Pakenham Secondary College and Tarago Valley Organics. The ever-inspiring environmental science teacher Ms. Allison Barrie would bring her class of students to the family-run organic dairy farm in Longwarry North, where they used the property to study the biology of plants and other micro-organisms that thrived there, thanks to the farm’s regenerative approach to land management.

This project, it turns out, would go on to sprout a ground-breaking collaboration.

Going back a year, I met Mama Queyea Tuazama in March of 2018 at the Pakenham Show that my Pakenham Community Garden was participating in. Queyea was the leader of the United Women’s Group of Liberia in Australia, and I was blown away that I had chanced meeting a community leader in the community garden. We quickly got talking about food that she missed from her motherland of Liberia, and we made plans to co-build a drum smoker that she could use to smoke fish for her whole family.

We kept in touch over the following months, and I later invited her to participate in a Food Safety Supervisors course subsidised by a local neighbourhood house with me and a few other members of the CFM. As we were filling out the last of the paperwork for the certificate, Queyea turned to me and said what she really wanted was access to farmland so that she could grow food for and with her community. Apparently Queyea had moved to Pakenham 10 years ago to be closer to farmland and have the opportunity to be able to farm, but had yet to meet anyone who could help make this dream a reality.

Within five minutes I had her on the phone speaking about her vision with Tarago Valley Organics, and at the same time I was writing an email to Pakenham Community School Farm asking if part of the land that had been allocated to the school on the farm property could be shared with Queyea and her community. Of course, it was a big YES.

I’ll never forget the day when Queyea, her friends and family, with South Sudanese Agricultural Scientist Thuch Ajak, prepared long rows and planted their first crops of salads, yams and collard greens. It was raining cats and dogs, but that didn’t stop them from dancing and tilling the fields, singing songs and clearly loving life. And so a new project was born: the United African Farm (UAF). Here is a clip that portrays very clearly what this opportunity meant for this community.

On the school side, my role was Farm Liaison Support and an Artisan Educator. This involved spending a day on the farm setting up the space for students to grow a crop of garlic, as well as building a storage shed to keep tools out of the rain. My other day on the project was spent at the school with Allison and the students in a program called Hands-On Learning, which aimed to help them develop practical skills to improve their sense of achievement and contribution. We converted wooden pallets into beautiful furniture, built over 100 square meters of raised garden beds and planted 60 fruit trees around the school. All to inspire and feed future generations of students.

Moving forward to the present, the UAF are now looking for land that is closer to their homes in Pakenham.

Looking back over these extraordinary times and experiences, I have much to be thankful for. I’m thankful for Sustain for inviting me to play a role in this work, and I am thankful for all of the local farmers, teachers, back- and front-yard growers, community members and my neighbours for welcoming me into their local food system with open arms.

With over three years worth of collective and community-based achievements, the biggest challenges in our journey for transformative foods systems change still lie ahead of us.

To reach and engage the most vulnerable members of society in this type of work is paramount. To ensure that no group faces inequality or discrimination in our food system, we first need to address the racial divides and barriers that concurrently exist in our food system. I can highly recommend Michaela Bohunicky’s post which speaks to this with greater depth.

Prior to working on the Cardinia Food Circles initiative, Max Godber lived in Montreal, Canada, where he worked in urban agriculture, food security and community organising. Max is passionate about creating community and sharing DIY skills such as beer brewing, pallet furniture building and bicycle repairs. When he is not working in his part time role with Sustain, Max coordinates weekly sessions at the Pakenham Community Garden and is currently setting up a new social enterprise micro-nursery growing vegetable and herb seedlings for local schools, market gardens and community groups. Oh, and Max is the proud owner of five lovely chickens who lay enough eggs to manage weekly food swaps with his neighbours.