The Story of A Palestinian Seed Bank

In 2019, Hanadi started a Seed Bank, the first of its kind in Gaza, to allow Palestinian farmers the ability to grow organic, local heirloom seeds. Hanadi has been pursuing and advocating for food sovereignty in Gaza in the face of setbacks from Israeli sanctions on Gaza, the COVID-19 pandemic, as well as continuing crises due to war, and an increasingly unstable climate. “The Seed Bank strengthens the local food system and encourages local farmers to use local seeds that suit our environment, climate and soil”, Hanadi tells us.

“I am proud of my project, which is the first of its kind in Gaza.” 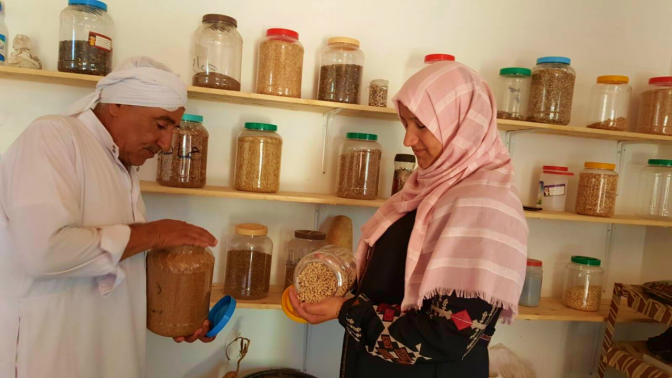 The Seed Bank’s main objective is to preserve local “Baladi” seeds (currently 33 varieties of seeds), which are at risk of becoming extinct. The idea for the project emerged because of the Israeli control over the Gazan food system. Farmers are pushed to use imported genetically modified seeds that the Palestinian people colloquially call “Israeli or foreign” seeds. The effects of this control and domination of foreign seeds hinders the ability of local farmers to be sovereign, that is, to control their own means of agricultural production. The project protects, promotes, and encourages the use of local Baladi seeds that are more suited to adapt to the changes in climate, along with having superior ability to grow free from disease without a reliance on chemical herbicides and pesticides.

The location of the Seed Bank sits within an agricultural region where local farmers can easily connect to utilise the bank and trade seeds. The bank supports a variety of seeds including vegetables and leafy greens such as spinach, silver beet, rocca (rocket), radish, a range of wheat and barley seeds, as well as aromatic and medicinal plant seeds such as moringa, chamomile, zaatar, peppermint, sage, basil, fennel, parsley, coriander, and dill.

“This project is really important to not only preserving seeds, but also to preserve our culture as Palestinians.  The local seeds don't require much irrigation and have greater adaptability to climate change and don't require extensive chemical input with herbicides and pesticides. The Seed Bank raises awareness for farmers and the broader community in how important it is to use local seeds instead of genetically modified seeds”.

Hanadi has a double degree in Geography and Education from Alaqsa University and supports her parents and her sister in the Khan Younis Gazan district. She joined Urban Women’s Agripreneurs Forum (UWAF) in 2020 where she was a youth leader and received experience and education in digital marketing. Now, Hanadi is a coordinator for Khan Younis district and facilitates communication between both GUPAP and women agripreneurs in Khan Younis district. 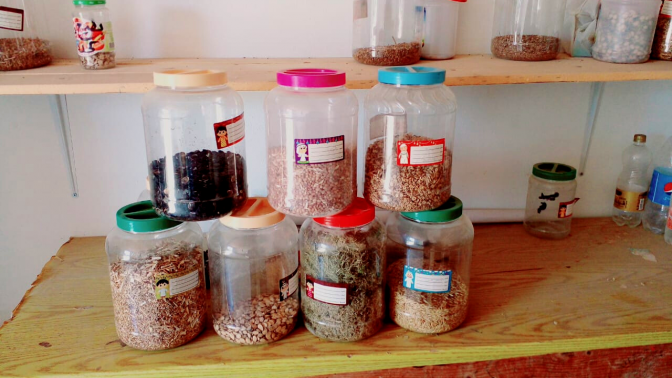 The forum assists women agripreneurs, in many ways however, Hanadi stresses the importance of their advocacy work with various government bodies to promote agricultural policy change. This advocacy work includes providing specifications and labels for selling products in shops and shopping centres to ensure the production of agricultural and animal products is food safe, credible, and can compete with global brands.

“Doing this work cultivates joy and hope for the women here, especially since our population suffers from sanctions imposed on the Gaza Strip, as well as living under siege for years with high levels of unemployment in our community” says Hanadi.

Hanadi dreams of one day being able to expand the Seed Bank to include a greenhouse and nursery to grow seeds, sell seedlings, and help Gazan’s access more local seeds. She also wants to purchase a machine to dry the seeds, which will make production faster and easier. “Here in Gaza we only get between 4-8 hours of electricity, so I use solar energy to ensure the fridge continues to operate,” she explains.

“The people here are resilient and continue to work and rebuild their lives despite the enormous difficulties and challenges we face.”

Ultimately, Hanadi believes that the campaign will promote the Seed Bank and show the world the success and resilience of Gazan women agripreneurs.

Support Hanadi and her aspirations for Palestinian food sovereignty by donating to our Gofundme campaign which will provide 50 women farmers, like Hanadi, with an equal number of grants, enabling them to rebuild scale their operations & strengthen their systems.