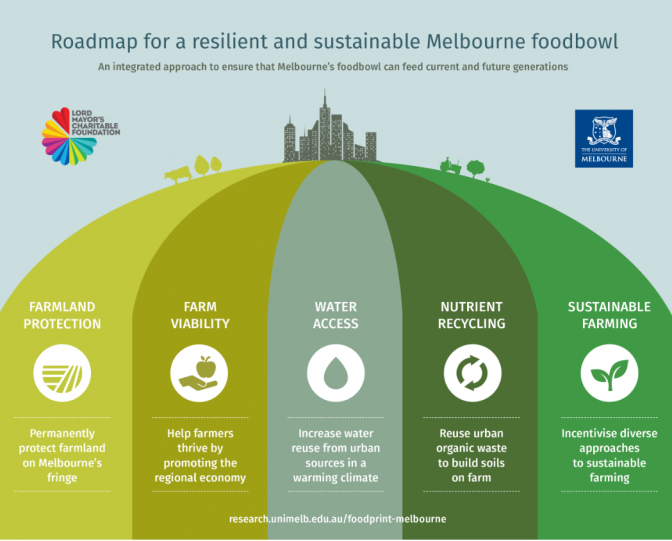 On 14th March 2019, the Victorian Government announced a public and stakeholder consultation to identify and protect what it termed 'strategic agricultural land', in order to 'protect food production in the peri-urban and green wedge areas'.

Sustain has delivered its response to this consultation, in which we raise a number of substantial concerns about the concept itself and the process by which it is being delivered. We reproduce our response below, which fully endorses the recommendations of the Foodprint Melbourne, 'Roadmap for a resilient and sustainable Melbourne foodbowl' (infographic above).

To whom it may concern,

I am writing on behalf of Sustain: The Australian Food Network in response to the proposed DEWLP approach of protecting strategic agricultural land through the Victorian and Local Planning schemes.

We, as an organisation, are concerned by the premise of this approach to protecting and growing the strong and vibrant agricultural industry on Melbourne’s fringe. Designating areas of the Green Wedge and peri-urban areas as being of higher value than others inadvertently weakens the Urban Growth Boundary and creates a target for developers in lobbying for opening up ‘low value’ farmland for housing and other non-agricultural uses. It also runs the risk of impacting on the land values of what are currently valuable and viable farms in Melbourne’s food bowl and directing investment and support from government away from these areas.

It could be argued that the assessment process proposed for this region is fundamentally flawed on three particular fronts.

Having made these observations, Melbourne’s food bowl has continued to punch above its weight in terms of food production and making the most of Melbourne’s vibrant food culture. The Foodprint Melbourne project has clearly demonstrated this over the past 3 years of research and their latest report offers clear direction as summarised by the following (taken from the ‘Roadmap for a resilient and sustainable Melbourne foodbowl’ Foodprint Melbourne Report):

In short, the proposed approach does not strengthen farming in Melbourne’s food bowl, but has the potential to undermine the strength of the Urban Growth Boundary, expose the government to lobbying from the development industry, create further uncertainty and reduce investment in the industry and does not consider the economic development support required to ensure the foodbowl not only reaches its potential now, but is secure for Melbourne’s future to underpin the climate resilience of the city.

If you wish to discuss these issues further, please do not hesitate to contact us.

On behalf of Sustain: The Australian Food Network